Have you ever woken up and realized that almost a decade has passed? Well my original little diaper model is turning nine years old and I am feeling a little nostalgic. I still remember telling people that I wanted to use cloth diapers for him while I was pregnant and people kept saying WHY? It was like hearing a broken record playing over and over. I felt that it was only natural to use cloth diapers and that disposable diapers were a luxury used for camping or vacations.  My mother used cloth diapers on my brother and I (due to an allergic reaction to the disposables) so why wouldn’t I want to wrap my little one in a soft natural cotton diaper?

I had a friend that gave me her old cloth diapers from when her oldest daughter was in diapers (9 years earlier!) and I was on a mission to prove to everyone that I could do it. I didn’t care how much work it could be. Well the diapers I was using were not very good.  They were not well fitted and they had rough edges.  I tried fixing them but ended up making my own from old flannel sheets. These homemade diapers were an improvement!  The diapers fit better, washed better and contained better. The only trouble is they weren’t quick and easy and if I needed to change a diaper while out of the house, it was still a big production.

I was inspired – I had to keep going. I bought some diaper fabrics and got busy.  I made many different types of diapers: All-in-ones, Fitted diapers and our beloved All in two diapers.

At one point the name was Annie Marie Padorie, but that was too hard for people to say, let alone remember so we shortened it to AMP. Some people say it like it’s a word while others spell it out. It’s all good!

Here is a little trip down memory lane. It’s an image of our first e-store. A lot has changed since then, but our focus is still the same. High quality, Canadian made diapering products that you and your baby can feel good about! 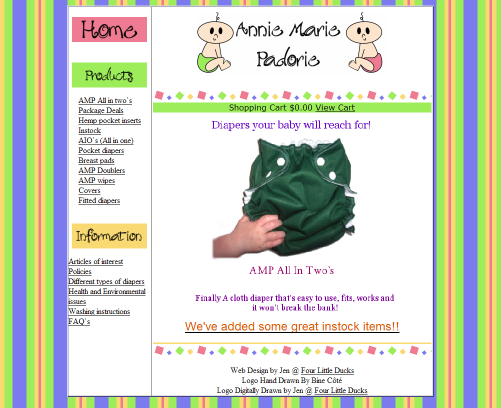 This entry was posted in Blog and tagged All in Two Diaper, All-in-One Diapers, Canadian Made, Memory Lane. Bookmark the permalink.